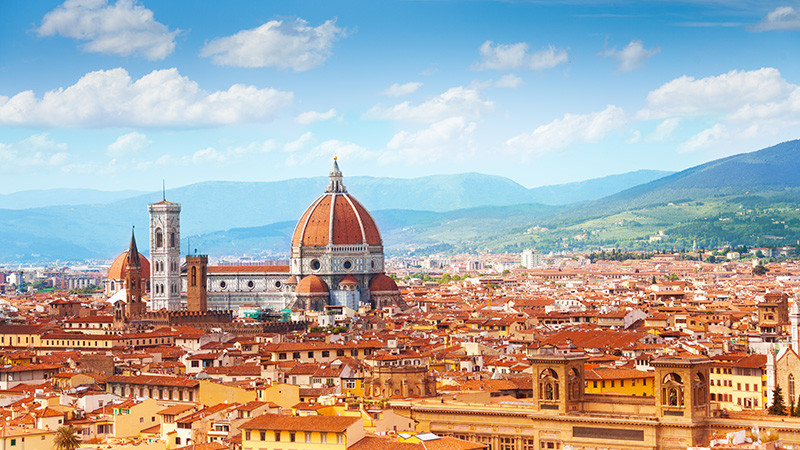 Florence is a city that has retained its own charm and the shine of its glorious past: a city that never stops surprising its visitors with its art, all churches with coloured marbles and all buildings evoking the splendour and the contribution the city has given to culture and renaissance art. Piazza del Duomo is still the religious core of the City, with its monumental complex of Santa Maria del Fiore, the Cathedral, surmounted by the majestic Brunelleschi’s Dome; the Baptistery of Saint John, a great example of romanico fiorentino, Giotto’s bell tower, a masterpiece of Florentine Gothic. At the back of the church, the Museum of Opera di Santa Maria del Fiore is worth a visit for the collection of works of art coming from the nearby Cathedral, Baptistery and Tower.
Piazza della Signoria stands as the political centre of the city; it hosts the medieval Loggia dei Lanzi, The Neptune Fountain and the Signoria Palace, or Palazzo Vecchio, a true landmark in town with famous statues in front of the main façade, like the copy of Michelangelo’s David. Beside the square, the majestic Galleria degli Uffizi, one of the most important musems in the world, displaying works of Botticelli, Michelangelo, Leonardo da Vinci and many others. The Vasarian Corridor, a project by Vasari was built around the middle of the XVI Century and still connects Palazzo Vecchio and Palazzo Pitti, on the other side of river Arno.
The medieval district of Santa Croce is another surprising area, with the namesake Basilica, famous for its frescos by Giotto and the graves of Italian artists: Michelangelo, Galileo Galilei and Machiavelli among these.
The monumental complex of San Lorenzo and Santa Maria Novella are worth a visit as well; across the ancient and beautiful Ponte Vecchio with its jewelries, it is possible to reach the Oltrarno district and the majestic square dominated by Palazzo Pitti, once residence of the Medici and Lorraine families, with a beautiful garden, Giardino di Boboli, a perfect example of Italian garden.