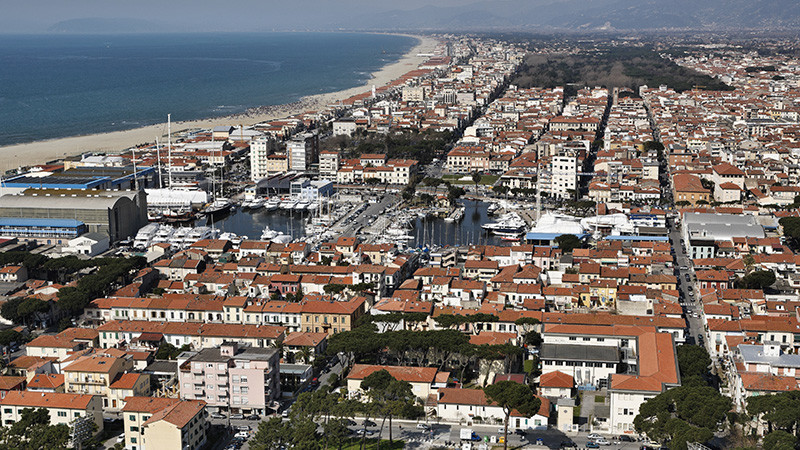 Versilia is a cultured and amusing land, well known for its sophistication. This strip of land, a part of Lucca province, stretches between the feet of Apuane Alps and the San Rossore Natural Park. Versilia is famous for its long sandy beaches from Forte dei Marmi to Viareggio and the typical dunes between Viareggio and Torre del Lago. Famous seaside resorts are lined up one after the other: the most exclusive Forte dei Marmi, the delightful town of Viareggio, Marina di Pietrasanta, and Lido di Camaiore. Forte dei Marmi is synonym of sophistication this town grew up around the rest of a fortress and is dotted by beautiful villas and famous clubs, such as the Capannina disco-club, which marked the Italian way of life back in the sixties. A vibrant cultural life develops through literary rendezvous with the famous International Festival of Satire (with a museum in the old fortress as well). The weekly market is also a must-see.
In the backcountry, Pietrasanta is the cultural capital of Versilia. Here, thanks to Michelangelo, the marble industry developed in the Sixteenth Century. Among the artists that still patronize Pietrasanta, the sculptor Fernando Botero: his works embellish the town. On the Tyrrhenian Sea, Marina di Pietrasanta is a relaxing and refined seaside resort, suitable for families.
Camaiore, with its typical Romanesque town centre (e.g. the 1278 collegiate church) lies in a basin at the feet of Apuane Alps: Camaiore is well known for its wrought-iron handcraft, whose manufacturing can be seen in person by visiting some workshops. Lido di Camaiore is the seaside resort nearby.
Last but not least, Viareggio, the southernmost resort in Versilia; it has been known since the Nineteenth Century, outside Italy as well. In the past Viareggio was the only access to the sea for Lucca, it is the city of Carnival (one of the most popular in Italy), at the same time it is a stylish and refined seaside resort. Packed with cafés, night- clubs attracting a young crowd, its town centre is characterized by a Liberty-style architecture. The “Viareggio” is also an important literary prize, which is held in town.
Versilia is a good reason to spend cultural and amusing holidays indeed. The beauty of the coast is given by the presence of a lush pinewood as well, an ideal background to the sandy shores. Within the Versiliana Park, in Marina di Pietrasanta, there is a Nineteenth Century villa, once property of the marquis Ginori Lisci. Today it is a public building hosting rendezvous and exhibitions, making Versilia the favourite tourist destination of Italian intellectuals. Among those Giacomo Puccini, who lived and worked in Torre del Lago, by the lake Massaciuccoli. The poet Gabriele D’annunzio owned a beautiful property in Marina di Pietrasanta; there he wrote the famous poem “La Pioggia nel Pineto”. The Nineteenth century poet Giosuè was born in the backcountry in Valdicastello Carducci: his humble home is now a museum.