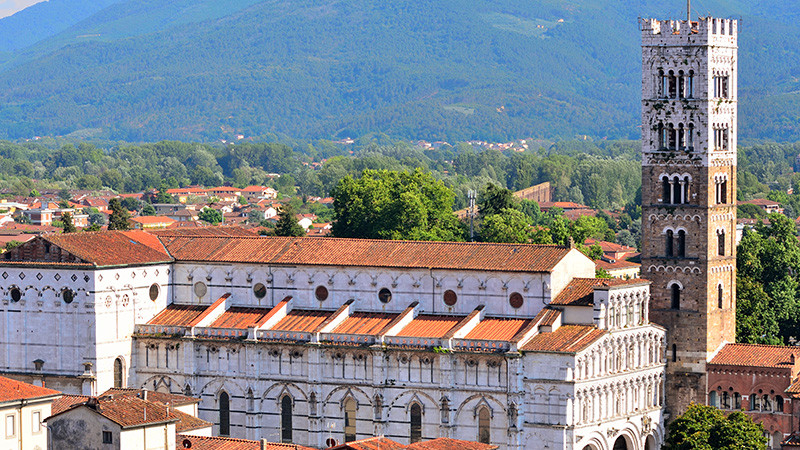 There is a lot to see in Lucca, a city of vast historical richness: indeed, Lucca has already been nominated to enter the list of UNESCO heritage, beginning with its almost intact walls encircling the town centre. It is possible to get through six different gates, built between the Sixteenth Century and the beginning of the Twentieth Century. Other gates connected to previous wall sections are still visible within the actual walls today: the ancient Porta San Donato (1590) in the namesake square, also hosting the Opera delle Mura, (an organization whose aim is the maintenance and care of the Lucca walls), Porta San Gervasio (1198) and Porta dei Borghi.

The city centre has kept its medieval atmosphere, thanks to the precious architecture, several old churches (Lucca is also known as the “city of the 100 churches”), bell towers and all Renaissance buildings. Among the towers, the Clock Tower with its 50 metres in height is the tallest: there, it is possible to observe a wind-up clock and the inner wooden staircase with 207 steps still well preserved. The Torre Gunigi is one of the most representative in town, with some holm-oaks on top of it. Many squares can be visited: Piazza dell’Anfiteatro, shaped on the ruins of an ancient Roman Amphitheatre, a project of Architect Lorenzo Nottolini. Piazza San Michele, historical core of town, Piazza San Martino with the famous Cathedral, Piazza Napoleone, a request by Elisa Baciocchi during her ruling over the city, Piazza del Giglio where the namesake theatre is.
The various monuments prove how the inhabitants read into the united message. The city joined the process of unification in a peculiar way, first under The Granducato di Toscana, then under the Kingdom of Italy, showing a strong will to preserve the local roots of its community. Lucca chose to celebrate by placing new monuments in the city centre.
Monuments dedicated to the founding fathers can be seen on a special tour, beginning with the statue of Francesco Burlamacchi, erected in 1863 in Piazza San Michele, followed by the Garibaldi soldier’s army monument to Tito Strocchi by Artemisio Mani in 1883 and placed in the city cemetery. The 1885 bronze piece of work on the rampart of Santa Maria was devoted to King Vittorio Emanuele II by the sculptor Andrea Passaglia. In Piazza del Giglio, there is a marble statue of Giuseppe Garibaldi, by Urbano Lucchesi, unveiled on September 20th 1889. The so -called “Hero of the two Worlds” is represented in full-length and the bronze bass-reliefs on the base show the “Expedition of the Thousand” and the battle of Calatafimi.
A humbler and isolated bust of Giuseppe Mazzini is on the rampart of San Regolo, dated back to March 16th 1890. On the Baluardo della Libertà a bronze monument to Benedetto Cairoli can be seen (1893). In the former Piazza delle Erbe, now Piazza XX Settembre, there is a winged Genius, part of war memorial, again by Urbano Lucchesi.
The history of a country and the spirit of a whole community can be traced after these monuments while exploring the city itself.